The simulation was performed as Table Top Exercise (TTX), Technology Acceptance Model (TAM), real-time scenarios use-cases, etc. It would be interesting to analyze the data from the simulation. 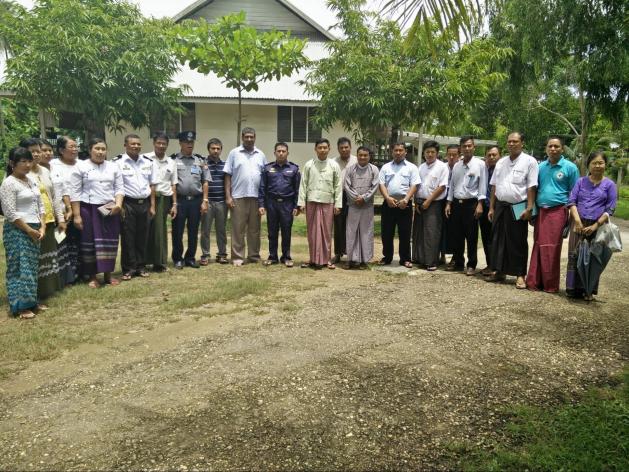 The simulation at DMH was added flavor with Human-Computer Interactions (HCI) Interaction usability (UI/UX) Evaluation and observer-based exercises. DMH is the major alert origination body in Myanmar. The HCI should be able to make aware of the mistakes while operating the system and also whether the system is designed to comply with the requirements and hence the missing nuts and bolts.

Limitations of the existing use-cases came to light, as participants were conducting the current Standard Operating Procedure (SOP) through the SAMBRO system all by discussing among themselves. The warning for Storm Surge is issued simultaneously along with the warning for the Tropical Cycle as the former is the result of the later, must send SMS to the high-level group notifying about the event before issuing the public warning.

The exercises were conducted separately for Seismology, Hydrology and Meteorology branch. Their scenario was different according to their own problem scope.

Various first responders came along RRD to discuss their problem scenario. Myanmar Radio and Television (MRTV) as keen on providing the official warnings to the public first-hand. Ministry of Health explained how the small act of foolishness could lead to a disease outbreak. They were concerned about the well-being of the Myanmar people.

They also explained about the information that they would need in order to carry out the relief work on the ground. They were happy to see the detailed, at a glance warning information on their phone and gave some valuable suggestions.

The GAD head called officers from a different department. Most of them were first responders. They gather around and discuss the various problem.

Most of the information comes from the high-level authority and disseminated to people at the ground level. Such information needs to be accurate and timely. While the Nargis Cyclone during 2008 was the biggest nightmare for people near the Kungyangon, and although the property loss is unavoidable people here realize how this system could save thousands of lives.

MRCS logistics officer was happy to receive the information on his mobile phone. An officer from the Ministry of Irrigation stated at least 2-3 days (preferably 5 days) prior information will be needed to safely handle the fertilizer, equipment and informing the farmers on the ground.

Following the simulation activities in Myanmar, DMH wants to run more simulation. They understand that not all the stakeholders are still included in the Common Alerting System, and hence their roles in the ground level should never be forgotten.

Although there was enough template to cover the event, some of them lack complete comprehensive warning priorities list. Like there are only two color stages(orange and red color) for Cyclone. Brown, Yellow and green color are not.

Complete and Managing the subscription

The subscription list needs to be completed by DMH after getting the list of the officials who need to be notified. The aim is to make the warning notification easier and reliable to use. Preparing different first responders group to warn about the private messages are essential.

Although DMH has already started to use the system for public alerting, we found from the simulation that not all the officer are 100% confident. DMH needs to run silent tests among themselves and local stakeholders to be more confident and help run the system effectively. Also, practice the standard SOP to make sure that workflow for the subscribers and publishers.

The next major step is to disseminate the system in about one month time. Myanmar officer should be ready to manage and use by them.

The 2016 CAP Implementation workshop is scheduled during 23-24 August 2016 in Bangkok, Thailand. The respective officer from the major stakeholder will be talking about the results and analysis of the simulation activities held in each CAP enabled SAMBRO implemented countries.

GIS Models to address the effect of Climate Change